We investigated the influence of cambial age on correlations between different wood traits and the possibility of early selection in order to help decision-making for the improvement of juvenile wood in white spruce (Picea glauca (Moench) Voss). Increment cores were analysed from 375 trees covering 25 open-pollinated families from a 30-year-old provenance–progeny trial in Quebec, Canada. Genetic and phenotypic correlations between different mechanical and fibre anatomy-related wood traits were found to vary with cambial age. Most correlations became stronger in magnitude in rings closer to the bark. An exception is the correlation between microfibril angle (MFA) and the modulus of elasticity where correlations were strongly negative from the pith to the bark. Age–age correlations for different wood traits were found to be high and possible gains from early selection were estimated to be good in ring 8 and older for most traits. MFA was the trait with the strongest potential for selection as early as ring 4, but a detrimental correlation with wood density may represent a drawback of such a juvenile selection approach. Estimates showed that selection concentrated on a few easily measurable traits such as wood density and core length holds promise to obtain superior genetic gains for mechanical properties, but negative impacts would be expected on fibre anatomy traits related to pulp quality. These findings show the need for more carefully planned breeding and selection strategies if one wishes to improve several traits for different end uses. 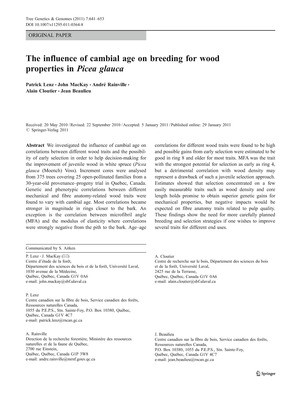