Marker-assisted selection holds promise for highly influencing tree breeding, especially for wood traits, by considerably reducing breeding cycles and increasing selection accuracy. In this study, we used a candidate gene approach to test for associations between 944 single-nucleotide polymorphism markers from 549 candidate genes and 25 wood quality traits in white spruce. A mixed-linear model approach, including a weak but nonsignificant population structure, was implemented for each marker–trait combination. Relatedness among individuals was controlled using a kinship matrix estimated either from the known half-sib structure or from the markers. Both additive and dominance effect models were tested. Between 8 and 21 single-nucleotide polymorphisms (SNPs) were found to be significantly associated (P ≤ 0.01) with each of earlywood, latewood, or total wood traits. After controlling for multiple testing (Q ≤ 0.10), 13 SNPs were still significant across as many genes belonging to different families, each accounting for between 3 and 5% of the phenotypic variance in 10 wood characters. Transcript accumulation was determined for genes containing SNPs associated with these traits. Significantly different transcript levels (P ≤ 0.05) were found among the SNP genotypes of a 1-aminocyclopropane-1-carboxylate oxidase, a β-tonoplast intrinsic protein, and a long-chain acyl-CoA synthetase 9. These results should contribute toward the development of efficient marker-assisted selection in an economically important tree species. 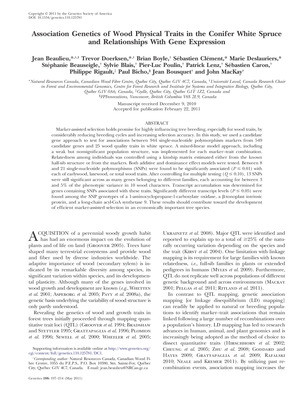