Solid-state 13C CPMAS NMR spectroscopy was used to characterize the primary organic components of nutshells. These are cellulose, hemicellulose, and lignin, in proportions roughly similar to those found in hardwoods. The lignin is composed mainly of varying proportions of syringyl and guaiacyl units, while some nutshells also had smaller amounts of phenylpropane units and tannins. The fibrous packing tissue inside shells of hazelnut (Corylus spp.) was high in condensed tannins, while the packing tissue from pecan (Carya illinoensis) shells (a red powder) was entirely a prodelphinidin polymer. 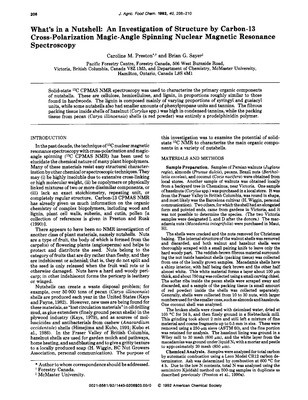