Boreal mixedwood understory communities are highly dynamic because they are simultaneously influenced by canopy succession, small-scale environmental variation and disturbances. In such a system, fire initiates succession but canopy gaps, resulting from spruce budworm outbreaks or other disturbances, also affect forest dynamics during succession. In this study, we assessed the short-term response of understory communities along a canopy gap severity gradient in mature and old-growth forest stands. The objective was to determine if resource heterogeneity is driving understory community composition and diversity. We created artificial gaps of varying severities in stands of two late successional forest stages. Four treatments, i.e., total cut, conifer cut, girdling of conifers and a control treatment, were each applied over an area of 100 m2 and replicated three times in both types of forest stands. The cover of each understory species was measured before treatment application and 1, 2 and 11 years following it, in seven 1 m2 plots per replicate. Percent transmission of photosynthetic photon flux density and soil temperature were also measured on different occasions after the beginning of the experiment. Species richness, alpha diversity and total cover all increased following gap creation, and this increase was sustained up to 11 years. Increases were more pronounced in total cut than in other treatments. The increase in species richness and diversity was also more pronounced in old-growth stands, while total cover increase was greater in mature stands. Gap creation resulted in significant changes in abundance patterns that were associated with the resident species assemblages. The magnitude of changes in community composition did not significantly differ between mature and old-growth forests and differences in species composition among stands were maintained following gap creation. This study supports the evidence that resource heterogeneity resulting from small-scale disturbances will contribute to maintaining diversity among understory communities by allowing species more typical of early-successional communities to coexist with species from late-successional ones. Such a process may be essential for maintaining the species pool likely to re-invade the stands following major disturbances. 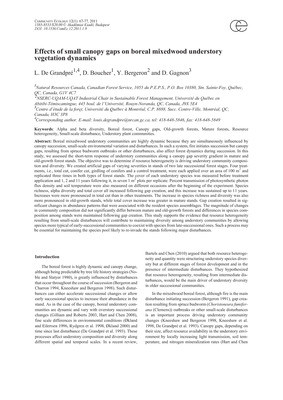