To meet the needs for improved spruce seeds in the province of Quebec, Canada, 17 first-generation white spruce seed orchards (SO) were established. These SOs are located in different bioclimatic domains and contain seed trees originating from geographically and genetically distinct sources. To evaluate the influence of SO on seedling growth and morphology, seedlings produced with seeds originating from the ten most commonly used first-generation white spruce SO in Quebec were raised under similar nursery conditions. Tissue nutrient concentrations of seedlings evolved similarly among seed orchards during the second growing season. At the end of the growing season, only shoot phosphorus concentrations were significantly different. When modeled with a logistic function, there was a significant difference between height and diameter growth curve parameters of seedlings from distinct SO during the second growing season. These differences led to significant differences in the height and shoot dry mass of the seedlings at the end of their second growing season, but not in their diameter or root dry mass. The ten SOs were clustered in two groups according to the above-ground characteristics of their progeny. This limited amount of morphological diversity suggests that expanding the size of the present seed zones may be an appropriate course of action for white spruce seed production in Quebec. 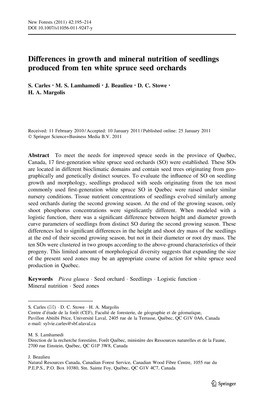