Spatial climate models were developed for México and its periphery (southern USA, Cuba, Belize and Guatemala) for monthly normals (1961–1990) of average, maximum and minimum temperature and precipitation using thin plate smoothing splines of ANUSPLIN software on ca. 3,800 observations. The fit of the model was generally good: the signal was considerably less than one-half of the number of observations, and reasonable standard errors for the surfaces would be less than 1◦C for temperature and 10–15% for precipitation. Monthly normals were updated for three time periods according to three General Circulation Models and three emission scenarios. On average, mean annual temperature would increase 1.5◦C by year 2030, 2.3◦C by year 2060 and 3.7◦C by year 2090; annual precipitation would decrease −6.7% by year 2030, −9.0% by year 2060 and −18.2% by year 2090. By converting monthly means into a series of variables relevant to biology (e. g., degree-days > 5◦C, aridity index), the models are directly suited for inferring plant–climate relationships and, therefore, in assessing impact of and developing programs for accommodating global warming. Programs are outlined for (a) assisting migration of four commercially important species of pine distributed in altitudinal sequence in Michoacán State (b) developing conservation programs in the floristically diverse Tehuacán Valley, and (c) perpetuating Pinus chiapensis, a threatened endemic. Climate surfaces, point or gridded climatic estimates and maps are available at http://forest.moscowfsl.wsu.edu/climate/. 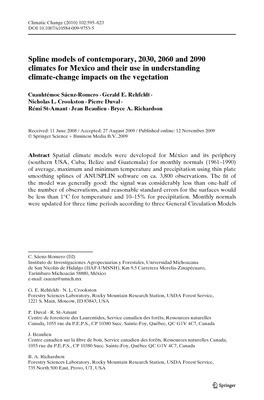