The contemporary genetic structure of species offers key imprints of how organisms responded to past geological and climatic events, which have played a crucial role in shaping the current geographical distribution of north-temperate organisms. In this study, range-wide patterns of genetic variation were examined in Douglas-fir (Pseudotsuga menziesii), a dominant forest tree species distributed from Mexico to British Columbia in western North America. Two organelle DNA markers with contrasting modes of inheritance were genotyped for 613 individuals from 44 populations. Two mitotypes and 42 chlorotypes were recovered in this survey. Both genomes showed significant population subdivision, indicative of limited gene flow through seeds and pollen. Three distinct cpDNA lineages corresponding to the Pacific Coast, the Rocky Mountains, and Mexico were observed. The split time of the two lineages from the Rockies lineage was dated back to 8.5 million years (Ma). The most recent common ancestors of Mexican and coastal populations were estimated at 3.2 and 4.8 Ma, respectively. The northern populations of once glaciated regions were characterized by a high level of genetic diversity, indicating a large zone of contact between ancestral lineages. A possible northern refugium was also inferred. The Mexican lineage, which appeared established by southward migration from the Rockies lineage, was characterized by the lowest genetic diversity but highest population differentiation. These results suggest that the effects of Quaternary climatic oscillations on the population dynamics and genetic diversity of Douglas-fir varied substantially across the latitudinal section. The results emphasize the pressing need for the conservation of Mexican Douglas-fir. 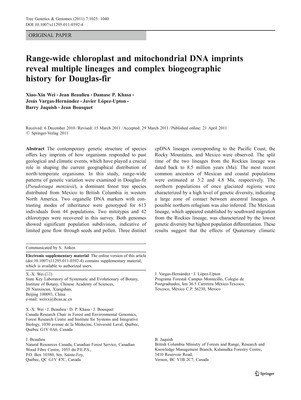