Animal groups that are abundant in the soil are the protozoans, nematodes, gastropod mollusks, arthropods and annelid worms. The abundance and number of species in these groups in British Columbia's soils can be estimated only roughly. Aside from protozoans, the numerically dominant groups are nematodes and arthropods, which may reach densities of over a million individuals and hundreds of species per square metre of surface soil. Most soil animals occur within 30 cm of the surface. This fauna, in concert with the microflora, affects soil processes in several important ways. They break up litter, bring about mineralization, serve as a reservoir of nutrients, influence microbiostasis and alter the physical characteristics of soils. The soil fauna is also important in controlling pests and pathogens. Human activity increasingly threatens soil faunal diversity, such as reduction through many agricultural and forestry practices including pesticides, fertilizers and fire. The fauna is also adversely affected by removal of organic matter, acid deposition, forest harvesting and soil compaction. The ability to identify species is essential for effective use of available knowledge and to minimize adverse effects of human activity. Unfortunately, many species in most groups are undescribed or cannot be identified because of inadequate literature. We know little about the ecological functions of soil fauna. Our extremely poor knowledge of species richness, species composition and ecological functions of soil fauna should caution us to be very conservative in our management practices. Basic taxonomic and ecological research on B.C.'s soil fauna are desperately needed. 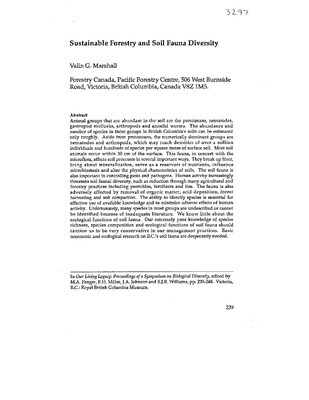