The USA version of this report is available on this site and is also available through this link to the USDA:

Projections of future climate were selected for four well-established general circulation models (GCMs) forced by each of three greenhouse gas (GHG) emissions scenarios recommended by the Intergovernmental Panel on Climate Change (IPCC), namely scenarios A2, A1B, and B1 of the IPCC Special Report on Emissions Scenarios. Monthly data for the period 1961–2100 were downloaded mainly from the web portal of the Coupled Model Intercomparison Project (Phase 3) of the Program for Climate Model Diagnosis and Intercomparison, and subsets of data covering North America were extracted. Scenario data sets were produced for monthly mean daily maximum and minimum temperatures, precipitation, solar radiation, wind speed, and vapor pressure. All variables were expressed as changes relative to the simulated monthly means for 1961–1990, which corrected for GCM bias in reproducing past climate and allowed future projected trends to be compared directly. The downscaling procedure used the ANUSPLIN software package to fit a two-dimensional spline function to each month’s change data for each climate variable at a spatial resolution of 5 arcminutes (0.0833º) longitude and latitude. The resulting scenarios were surprisingly consistent, with differences resulting from different GHG forcings being generally greater than those resulting from different GCMs, although the consistency varied spatially. The A2 emissions scenario invariably generated the greatest warming by 2100, and the B1 scenario the least. Canada’s far north was projected to undergo the greatest regional increases in temperature and precipitation, and the southeast and west coastal regions the least, with intermediate warming in midcontinental regions. All models projected increases in precipitation that were generally correlated with the projected increases in temperature, although with greater differences in spatial and seasonal patterns. Changes in vapor pressure were similarly correlated with changes in temperature and precipitation, whereas solar radiation was projected to decline slightly in regions where the increase in precipitation was particularly pronounced. Gridded data sets will be made available as a resource to researchers and others needing high-resolution data for studies of the impacts of climate change. A companion report and data set will be issued by the US Department of Agriculture Forest Service for the continental United States and Alaska. 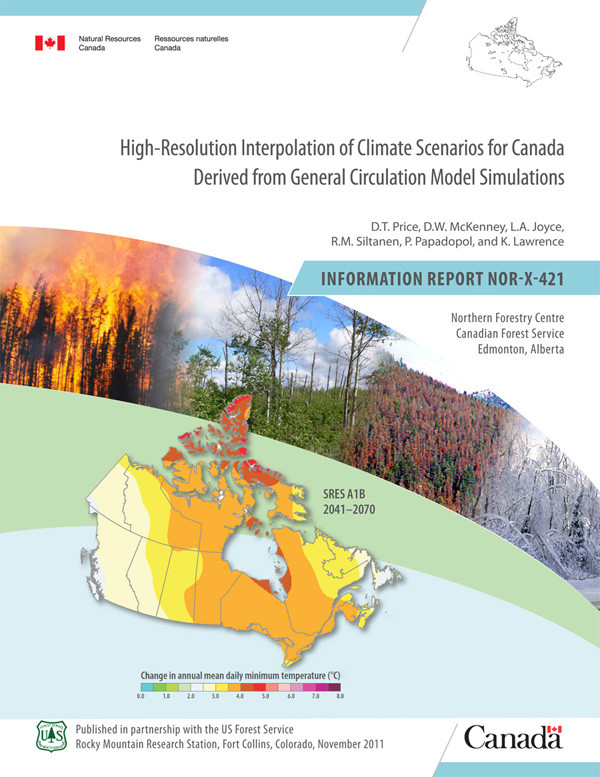