The idea that humans can assist nature by purposely moving species to suitable habitats to fill the gap between their migration capability and the expected rate of climate change is being increasingly contemplated and debated as an adaptive management option. The interest in assisted migration, both in the scientific community and society at large, is growing rapidly and is starting to be translated into action in Canada. However, the concept is in its infancy; clear terminology has not yet been established and assisted migration still encompasses a broad range of practices. This introductory paper for the special issue of The Forestry Chronicle on the subject of assisted migration describes increasing interest in the subject and its complexity. It also provides an overview of the potential scale of assisted migration, proposes a terminology,and briefly introduces the following papers. Overall, the five papers aim to present a comprehensive state of the scientific and operational knowledge and the debate on assisted migration in the context of Canada’s forests. 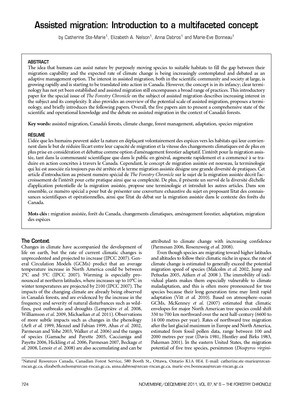