Assisted migration has been proposed as one tool to reduce some of the negative ecological consequences of climate change. The idea is to move species to locations that could better suit them climatically in the future. Although human mediated movements are not a recent phenomenon, assisted migration has lately been the source of debate, in particular within conservation biology circles. In this paper, we outline the major perspectives that help define differing views on assisted migration and shed some light on the ethical roots of the debate in the context of Canadian forests. We emphasize that there are many different forms of assisted migration, each responding to different (often unstated) objectives and involving unique risks and benefits, thus making the debate more nuanced than often portrayed. We point out certain seeming contradictions whereby the same argument may be used to both support and oppose assisted migration. The current debate on assisted migration primarily focuses on ecological risks and benefits; however, numerous uncertainties reduce our capacity to quantitatively assess these outcomes. In fact, much of the debate can be traced back to fundamental perspectives on nature, particularly to the ethical question of whether to deliberately manage natural systems or allow them to adapt on their own. To facilitate discussion, we suggest that the focus should move towards a clearer identification of values and objectives for assisted migration. 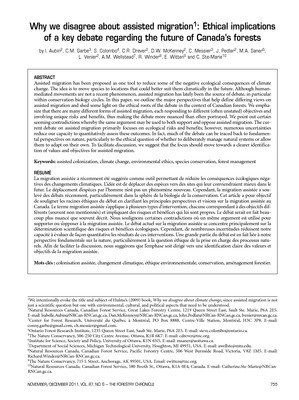