We collected, identified, and quantified volatiles arising from individual gallery entrances of the monogamous bark beetle Dendroctonus frontalis Zimmermann. Samples were collected while the insects were mass attacking mature loblolly pines (Pinus taeda L.) in an established infestation in western Mississippi, 1 August through 3 October 2005. Following volatile sample collection, the entrances were dissected and categorized according to those that 1) contained a solitary female (the gallery initiating sex), 2) contained a pair that had not yet produced an egg gallery, 3) led to an egg gallery with niches and/or eggs, or 4) represented failed attacks (either abandoned or containing dead beetles). The greatest mean release rate of the female-produced aggregation pheromone components frontalin (74 ng/h) and trans-verbenol (0.35 ug/h) was detected from entrances of solitary females, whereas the highest mean quantities of the male-produced multifunctional pheromone components endo-brevicomin (18 ng/h) and verbenone (0.15 ug/h) were detected from entrances of preoviposition beetle pairs. Alpha-pinene, a host-produced monoterpene that functions as a synergist for the aggregation attractant for D. frontalis, was detected from entrances of solitary females and preoviposition pairs at a rate of 0.6 mg/h, or 3Ð4 orders of magnitude greater than the insect-produced components of the attractant. Our results indicate that the release rates of pheromone components used in published Þeld studies of the chemical ecology of D. frontalis (generally >0.1 mg/h) represent thousands of "attack equivalents" or production rates on the scale of a beetle mass attack on a single host. Additionally, our data suggest that the loss in attractiveness of host tissue fully colonized by D. frontalis is because of the disappearance of attractants rather than an increase in inhibitors. 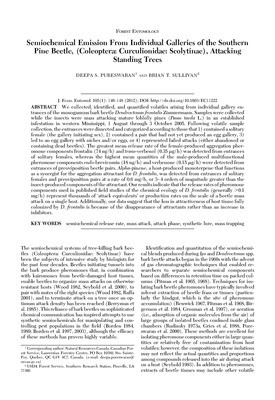