Granular ammonium nitrate and carbofuran were applied to soil beneath white spruce (Picea glauca (Moench) Voss) and black spruce (Picea mariana (Mill.) B.S.P.) seed trees to stimulate reproductive development and protect them from defoliating and cone-feeding insects. Rates of carbofuran application were 0, 10.8, or 21.6 g/cm DBH for white spruce, and 0, 5, or 10 g/cm DBH for black spruce. Both species received 0, 224, or 448 kg N/ha of ammonium nitrate. Trees were assessed for defoliation by the eastern spruce budworm (Choristoneura fumiferana Clem.), cone insect damage, seed-cone bud production, cone production, seed yields, and needle senescence for 3 years in white spruce, and 2 years in black spruce. On white spruce, carbofuran reduced defoliation and number of spruce budworm at both application rates in the year of treatment and at the high rate in the second year; no protection was observed in the third year. Seed-cone bud production was stimulated by carbofuran for 3 years following treatment. Needle senescence was increased by carbofuran. Ammonium nitrate decreased needle senescence but had no effects on other assessment variables. On black spruce, carbofuran did not reduce spruce budworm numbers or protect cones in the year of application but, in the year after treatment, both foliage and cones were protected. Defoliation was reduced by the low rate of applied ammonium nitrate. Treatments did not influence the number of seed-cone buds or cones or amount of needle senescence in black spruce. 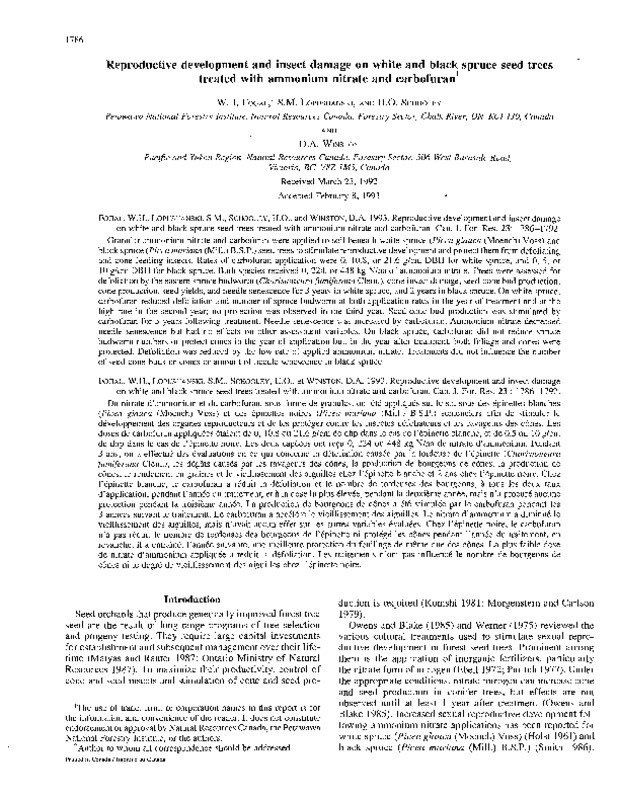