Forest fires are a significant activity in forest ecosystems in Canada. Annually, an average of 9000 fires burn more than 2 million ha, which is twice the average area burned in the early 1970s. While there are ecological advantages to fires in the boreal forest, such as stand renewal, fires that encroach on human settlement or other high value areas can be financially devastating and endanger lives. Fire management is the most expensive aspect of forest management, costing Canada an average of $500-800 million per year. Various modeling scenarios predict increases of double or more in the area burned by the end of this century. These predictions are based on climate models and the relationship between fire and weather. For example, since temperature is the most important predictor for area burned, and with warmer temperatures expected due to climate change, an increase in area burned is expected. This changing trend in fire activity will have major implications for forest ecosystems, forestry activities, community protection, and carbon budgets. The effects of forest fire on the boreal forest have received considerable attention, but less is known about the vulnerability of boreal peatlands to burning. Peatland ecosystems cover 2-3% of the earth’s land surface, but 25-30% of the boreal forest region. It is estimated that they store 30% of the world’s terrestrial carbon, or about 300 Pg (petagrams or billion metric tons), a substantial proportion of the estimated total boreal forest carbon stock of 471 Pg. These carbon reservoirs are likely to become increasingly vulnerable to fire as climate warming progresses. 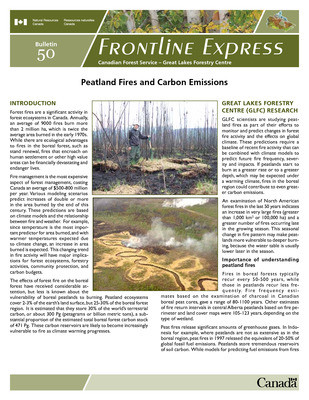