The emerald ash borer (EAB), Agrilus planipennis Fairmaire, is an invasive pest thought to have arrived from Asia in the 1990s. It was first detected in Michigan and southwestern Ontario in 2002 and is rapidly spreading throughout North America, where it poses a serious threat to all native ash trees. In addition to the ecological consequences that may ensue, such as the effects on forest biodiversity, the loss of ash trees will have a significant effect on the hardwood forest industry, private woodlot owners, First Nations and municipalities. Tens of millions of ash trees have succumbed to EAB in Ontario, Quebec and a greater part of north-eastern United States, and economic losses are significant. Cities have incurred substantial costs for the treatment or removal and replacement of these high value trees. Removal costs of a single dead ash tree can be up to $1500. The amount spent for ash tree removal in the north-eastern US alone is estimated to be in the billions of dollars. EAB is particularly difficult to control because the insect spends its destructive larval stages under the bark, and by the time damage is visible trees may have already succumbed to infestation. In Canada, control measures to date have included quarantines and restrictions on transport of ash materials, tree removal and the use of the botanical insecticide TreeAzinTM for individual, high-value trees. Currently there is no single effective control option for wide-spread use against this invasive pest. Consequently, scientists are studying many aspects of the pest with the aim of managing established populations in the longer term. Control strategies to be adopted will require a multitactic management program that will include effective detection and trapping. One promising possibility is a biological control approach using natural enemies, which is recognized as one of the most suitable long term pest management strategies for invasive species because it may decrease population densities and reduce the spread and duration of outbreaks. 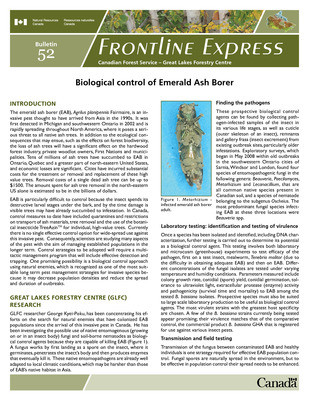