In the near future, forest tree species growing in eastern Canada are expected to be affected by climate change due to an increase of human-induced greenhouse gas emissions. In this study, models were developed to estimate the impact of climate change on growth in white spruce (Picea glauca (Moench) Voss). Data were collected in a genecological test, replicated in three locations, and involving 45 distinct geographical seed sources, most of them represented by five open-pollinated families. Transfer models predicting the performance of seed sources were developed, based on temperature and precipitation differentials between the geographical origin of seed sources and the experimental site locations. These models were validated using data collected in a second genecological test series. We found that white spruce populations located within the sampled area were optimally adapted to their local environment for thermal conditions but not for moisture conditions; populations that originated from sites receiving more precipitation generally showed higher tree growth than the local sources.We predict that the adaptive lag currently related to precipitation will increase under global warming conditions. Simulations of growth under various scenarios of climate change indicated that it would be diminished tangibly under more intense warming. However, for a given temperature increase, the relative loss in growth will be less if precipitation is reduced than if it increases. Consequently, predictions based solely on temperature change appear inaccurate, and more effort should be directed toward better anticipating the magnitude and the direction of changes in precipitation patterns at the regional scale. The necessity of human intervention to assist tree migration under climate change is examined. 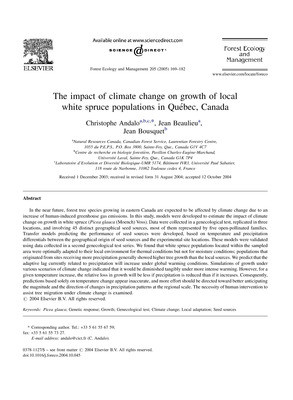