The limited availability of ground sample plots in Canadian northern regions requires a greater dependency of biomass mapping methods on modeling and remote sensing. We have developed and tested a method to map above-ground biomass of black spruce (Picea mariana) stands in northeastern boreal regions of Canada using high resolution satellite images. The method relies on QuickBird images transformed into biomass maps through image processing algorithms using the shadow fraction of tree crowns (SF). Three images provided test sites in diversified areas. A bitmap layer comprising the tree shadow was derived from the images. SF was calculated from the fraction of shadow area over the total area of reference square areas of fixed dimension overlaid on 108 ground sample plots (GSP). A linear regression was applied between GSP biomass and SF. The regressions for each of the test sites produced R2, RMSE and bias in the range of 85 to 88% (except one case at 44%), 14 to 18 t/ha and -3 to 8 t/ha, respectively. As statistical tests showed that there is no evidence that the 3 sites regressions are different, a global regression was calculated with all GSPs and produced R2, RMSE and bias of 82%, 15.3 t/ha and 4.2 t/ha respectively. Generalization of these results to extended areas of the boreal forest remains to be assessed in more details. However, the method appears to be an efficient mean to map biomass of black spruce stands in Canadian northern boreal forests. 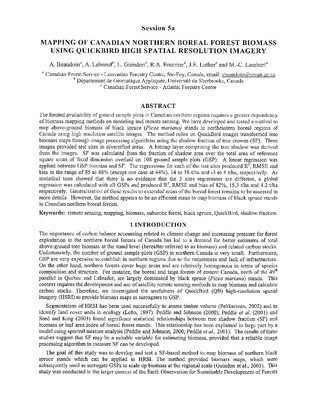