Spatial models of 1971–2000 monthly climate normals for daily maximum and minimum temperature and total precipitation are required for many applications. The World Meteorological Organization’s recommended standard for the calculation of a normal value is a complete 30-yr record with a minimal amount of missing data. Only 650 stations (~16%) in Canada meet this criterion for the period 1971–2000. Thin-plate smoothing-spline analyses, as implemented by the Australian National University Splines (ANUSPLIN) package, are used to assess the utility of differing amounts of station data in estimating nationwide monthly climate normals. The data include 1) only those stations (1169) with 20 or more years of data, 2) all stations (3835) with 5 or more years of data in at least one month, and 3) as in case 2 but with data adjusted through the most statistically significant linear-regression relationship with a nearby long-term station to 20 or more years (3983 stations). Withheld-station tests indicate that the regression-adjusted normals as in dataset 3 generally yield the best results for all three climatological elements, but the unadjusted normals as in dataset 2 are competitive with the adjusted normals in spring and autumn, reflecting the known longer spatial correlation scales in these seasons. The summary mean absolute differences between the ANUSPLIN estimates and the observations at 48 spatially representative withheld stations for dataset 3 are 0.36°C, 0.66°C, and 4.7 mm, respectively, for maximum temperature, minimum temperature, and precipitation. These are respectively 18%, 7%, and 18% smaller than the summary mean absolute differences for the long-term normals in dataset 1. 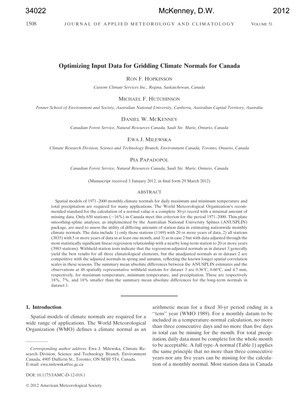