Clonal forestry can significantly increase forest productivity and its establishment requires a high level of clonal variation to maximize genetic gain and diversity. An evaluation of the genetic parameters of clones at a juvenile stage is necessary to better understand the amplitude of clonal variability and the degree of genetic control. The analysis of variance of white spruce clones showed a highly significant clonal effect for the majority of the growth characters at the end of both growing seasons and for the mineral status at the 2+0 stage. Our results reveal that height exhibits a high clonal heritability value which remained stable over the two growing seasons (H2 c= 0.60). Strong genotypic and phenotypic correlations were observed between height and diameter at the end of the first growing season and between height and the rest of the growth characters at the end of the second growing season. The strong clonal variation, genetic control and genetic correlation particularly of height found in this study indicate that the selection ability of the best performing clones is possible for intensive forest management. 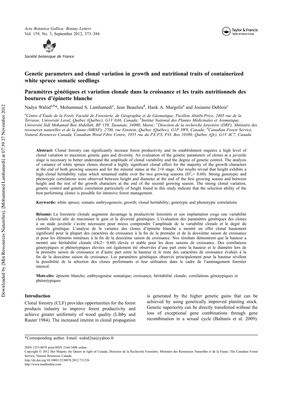