We describe seasonal patterns of parasitism by Telenomus coloradensis Crawford, Telenomus droozi Muesebeck, Telenomus flavotibiae Pelletier (Hymenoptera: Scelionidae), and Trichogramma spp. (Hymenoptera: Trichogrammatidae), egg parasitoids of the hemlock looper, Lambdina fiscellaria (Guenée) (Lepidoptera: Geometridae), after a 3-yr survey of defoliated stands in the lower St. Lawrence region (Quebec, Canada). Results from sentinel trap sampling indicate that T. coloradensis and T. droozi are the most common species, whereas parasitism by T. flavotibiae and Trichogramma spp. is rare. Telenomus coloradensis and T. droozi show similar seasonal periods of parasitism, both species being active in early spring (late April) at temperatures as low as 4°C. Using thermal threshold (T0) and thermal constant (K) for immature development of T. coloradensis males and females from egg to adult emergence, we estimated that the spring progeny emerges in the middle of the summer while hemlock looper eggs are absent from the forest environment. Parasitoid females would then mate and remain in the environment to 1) exploit alternate host species, 2) enter into quiescence and later parasitize eggs laid by hemlock looper females in the fall, 3) enter into a reproductive diapause and parasitize hemlock looper eggs only the next spring, or all of these. Although previous studies have shown that T. coloradensis can overwinter in its immature form within the host egg, our Þeld and laboratory results indicate that in the lower St. Lawrence region, this species principally enters diapause as fertilized females, with a mean supercooling point of -30.6°C in the fall. 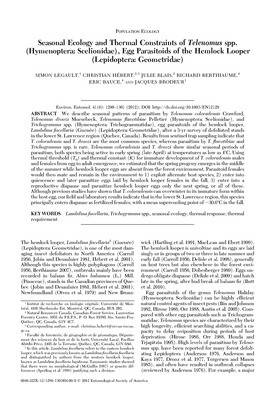