Allee effects can cause populations to decline due to decreasing population growth rates with decreasing density and play a major role in population dynamics. Mate-finding failure, a common mechanism contributing to demographic Allee effects, is usually difficult to demonstrate because of the arduous nature of sampling individuals at very low densities. In a rising outbreak of the eastern spruce budworm, Choristoneura fumiferana (Clemens) (Lepidoptera: Tortricidae), we used caged and tethered virgin females in traps to measure mating success over population densities ranging from deep endemic to outbreak conditions. We found that mating success increased with increasing population density, and that at endemic population densities, females experienced difficulties attracting males and mating, demonstrating for the first time a mate-finding Allee effect in the spruce budworm. The relationship between population density and mating success is nonlinear. As population density increased, the proportion of mated females eventually reached a plateau and mating success was not 100% even at the highest moth densities, probably due to female reluctance to mate and perhaps interference competition by males for access to females. Both laboratory-reared and wild females were equally effective in synthesizing pheromone, attracting males, and mating. Our results strongly suggest that a mate-finding Allee effect is involved in maintaining low-density spruce budworm populations below an Allee threshold where they fail to grow. Factors such as changes in predation pressure and immigration could help populations overcome this Allee threshold. 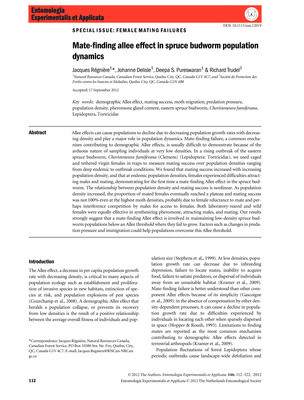