Western hemlock (Tsuga heterophylla (Raf.) Sarg.) seedlings grown in two different container cavities that received four different dormancy induction treatments, short (SD) or long days (LD) in combination with moisture stress (D) or no stress (W) in the greenhouse, and lifted and placed in cold storage (November, January, or March), were planted on two adjacent coastal reforestation sites in British Columbia and monitored for survival and morphological development. Survival was greatest in seedlings grown in the larger cavities in the greenhouse, in seedlings lifted in March, and in seedlings not treated to moisture stress. Seedling shoots had more stem units on the southeast than the northwest site, but the amount varied with nursery treatment. Seedlings from the LD treatments produced more stem units during free growth and lammas growth than those from the SD treatment. Nevertheless, most shoot growth was predetermined in the buds during nursery culture, accounting for a minimum of 67% of the final number of stem units. Stem unit length (SUL) was longer in seedlings on the southeast site than on the northwest site for those treated to LD in the nursery. Seedlings treated to short days showed the reverse pattern (SDW) to this, or were unaffected by site (SDD). Shoots and needles were shortest for seedlings from the SDD treatment and for those lifted in November. Shoot growth was greatest for seedlings lifted in March and for those treated with LD, mainly owing to their longer SUL. Lammas growth was most frequent in seedlings from the smaller cavities, and in those from the November and March lifts. 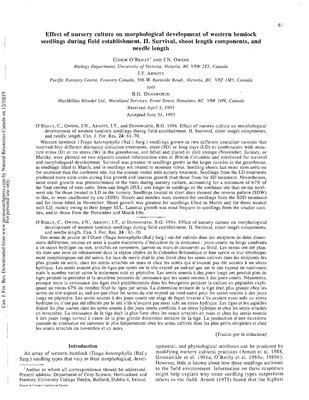