Wildfire activity in North American boreal forests increased during the last decades of the 20th century, partly owing to ongoing human-caused climatic changes. How these changes affect regional fire regimes (annual area burned, seasonality, and number, size, and severity of fires) remains uncertain as data available to explore fire–climate–vegetation interactions have limited temporal depth. Here we present a Holocene reconstruction of fire regime, combining lacustrine charcoal analyses with past drought and fire-season length simulations to elucidate the mechanisms linking long-term fire regime and climatic changes. We decomposed fire regime into fire frequency (FF) and biomass burned (BB) and recombined these into a new index to assess fire size (FS) fluctuations. Results indicated that an earlier termination of the fire season, due to decreasing summer radiative insolation and increasing precipitation over the last 7.0 ky, induced a sharp decrease in FF and BB ca. 3.0 kyBP toward the present. In contrast, a progressive increase of FS was recorded, which is most likely related to a gradual increase in temperatures during the spring fire season. Continuing climatic warming could lead to a change in the fire regime toward larger spring wildfires in eastern boreal North America.

What factors have influenced the frequency and size of forest fires in North American boreal forests since the last glaciation? Using carbons found in lakebed sediment, researchers have demonstrated that the number of fires and the amount of burned biomass have decreased in the last 3,000 years. This trend is explained by a decrease in duration and intensity of solar radiation in summer, along with an increase in annual precipitation.

However, the fires themselves are becoming larger. To explain this phenomenon, researchers have shown that fire size is related to mean springtime temperatures. These temperatures have in fact increased by approximately 1°C over the past 5,000 years. 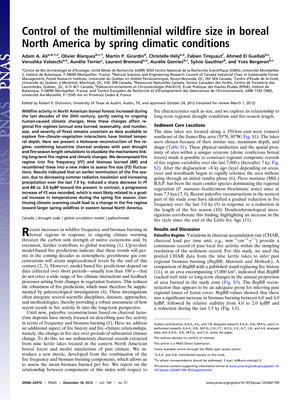