We identified the factors that affect the early colonization of burned stands by adults and the progeny surviving in fire-killed black spruce trees for three cerambycid beetles: Acmaeops proteus proteus (Kirby), Acmaeops pratensis (Laicharting), and Monochamus scutellatus scutellatus (Say) (Coleoptera: Cerambycidae) in the northern Canadian boreal forest. Furthermore, we measured if progeny emerging from burned trees was related to patterns of adults captured in traps the same year as the fire. Fire severity at the stand and landscape scales were the most important predictors for colonizing adults. Except for A. pratensis, thick-barked and lightly burned trees positively influenced the occurrence of surviving progeny at the tree level. Last-instar larvae of A. pratensis emerged from burned trees more often in severely burned landscapes. This may result from biotic interactions with intraguild species or predators. With the exception of A. pratensis, variables affecting the postfire abundance and occurrence pattern of adults were strikingly different from progeny emerging after fire. Progeny emerging from burned trees was almost exclusively related to tree- or stand level characteristics, whereas colonizing adults were correlated with variables measured at various spatial scales, and most often at the landscape scale. Moreover, A. proteus proteus and M. scutellatus scutellatus adults were more common in severely burned landscapes, although their progeny emerged more often in lightly or moderately burned trees. Host selection behavior within stands (e.g., host acceptance) by colonizing adults or host suitability for the larvae might have caused this discrepancy. 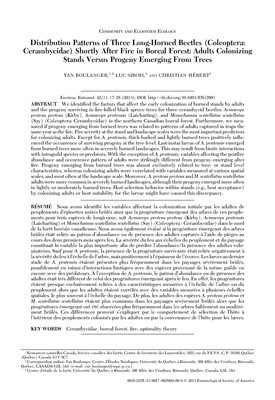