Trends of summer precipitation and summer temperature and their influence on trends in summer drought and area burned in British Columbia (BC) were investigated for the period 1920–2000. The complexity imposed by topography was taken into account by incorporating high spatial resolution climate and fire data. Considerable regional variation in trends and in climate–fire relationships was observed. A weak but significant increase in summer temperature was detected in northeastern and coastal BC, whereas summer precipitation increased significantly in all regions—by up to 45.9 %. A significant decrease in province-wide area burned and at the level of sub-units was strongly related to increasing precipitation, more so than to changing temperature or drought severity. A stronger dependence of area burned on precipitation, a variable difficult to predict, implies that projected changes in future area burned in this region may yield higher uncertainties than in regions where temperature is predominantly the limiting factor for fire activity. We argue that analyses of fire–climate relationships must be undertaken at a sufficiently high resolution such that spatial variability in limiting factors on area burned like precipitation, temperature, and drought is captured within units. 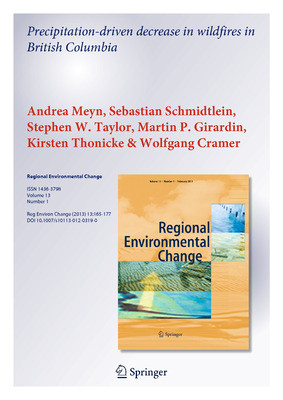