There is general consensus that wildfires in boreal forests will increase throughout this century in response to more severe and frequent drought conditions induced by climate change. However, prediction models generally assume that the vegetation component will remain static over the next few decades. As deciduous species are less flammable than conifer species, it is reasonable to believe that a potential expansion of deciduous species in boreal forests, either occurring naturally or through landscape management, could offset some of the impacts of climate change on the occurrence of boreal wildfires. The objective of this study was to determine the potential of this offsetting effect through a simulation experiment conducted in eastern boreal North America. Predictions of future fire activity were made using multivariate adaptive regression splines (MARS) with fire behavior indices and ecological niche models as predictor variables so as to take into account the effects of changing climate and tree distribution on fire activity. A regional climate model (RCM) was used for predictions of future fire risk conditions. The experiment was conducted under two tree dispersal scenarios: the status quo scenario, in which the distribution of forest types does not differ from the present one, and the unlimited dispersal scenario, which allows forest types to expand their range to fully occupy their climatic niche. Our results show that future warming will create climate conditions that are more prone to fire occurrence. However, unlimited dispersal of southern restricted deciduous species could reduce the impact of climate change on future fire occurrence. Hence, the use of deciduous species could be a good option for an efficient strategic fire mitigation strategy aimed at reducing fire propagation in coniferous landscapes and increasing public safety in remote populated areas of eastern boreal Canada under climate change.

Over the last 3 years, forest fires have affected many communities in Canada and the United States. Based on anticipated climate change, these disturbances are likely to occur more frequently in the future.

Changes in forest composition – either naturally or through specific forest management regimes – would make it possible to prevent the increase in boreal forest fires expected to occur between now and the end of the 21st century. The method most likely to work consists in promoting the growth of a greater number of hardwood species (maple, poplar, etc.) in coniferous forests. 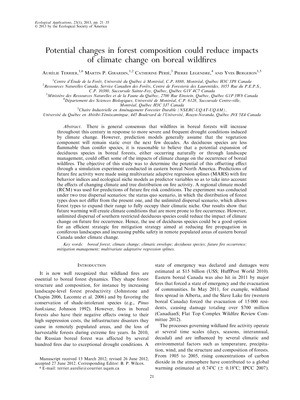