Six hundred Douglas-fir (Pseudotsuga menziesii) and 600 lodgepole pine (Pinus contorta var. latifolia) seedlings were planted on seven plots in a cutover north of Golden, British Columbia, to ascertain the impacts of stump uprooting operations conducted to control the spread of root disease on site productivity. Equal numbers of trees were planted on tracks and deposits created during stump uprooting, and on undisturbed ground, as confirmed by the presence of an intact humus layer. Soil characteristics were measured initially on disturbed and undisturbed portions of the cutover, and tree growth was monitored for eight growing seasons after planting. Foliage was sampled for nutrient content after the fifth year. Seventy-two percent of the area was disturbed by the stump uprooting operation, about equally divided between gouges (mainly tracks) and deposits. The top 20 cm of soil in tracks was on average 23% denser and 68% less penetrable than the equivalent layer of undisturbed mineral soil. In contrast, deposits were about equal in density to undisturbed soil and, at depths of 15 and 20 cm, were about half as resistant to penetration. The presence of free carbonates in the surface mineral soil increased with increasing depth of disturbance from 2% of spots sampled in undisturbed soils to 41% of spots with very deep (>25 cm) gouges or deposits. Douglas-fir seedlings planted in tracks were the smallest after eight growing seasons, significantly less in height and diameter (12-14%) than for seedlings planted in deposits or undisturbed soil. After 8 years, lodgepole pine seedlings planted in tracks were on average significantly (12%) shorter than those planted on undisturbed ground. The two species planted in tracks contained 23-25% less volume, but differences were not statistically significant. Growth rates for seedlings planted in deposits were similar to those for undisturbed ground. Vegetative cover increased more slowly on tracks than deposits and included a number of species not frequently found on deposits or undisturbed ground. Comparisons of productivity impacts resulting from uprooting stumps and from other forestry operations are made using research results obtained by the authors and other researchers. 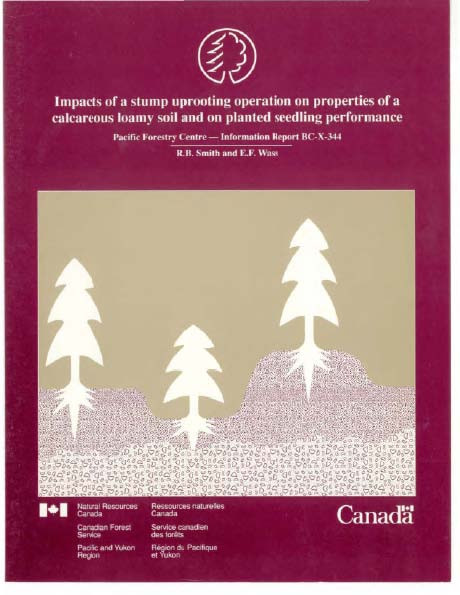