A plantation consisting of three plots with 160 seedlings each of Douglas-fir (Pseudotsuga menziesii) and lodgepole pine (Pinus contorta var. latifolia) was established in a cutover north of Golden, British Columbia, in the Interior Cedar-Hemlock biogeoclimatic zone. To determine the impact of contour-built skidroads on survival and subsequent growth of planted seedlings, plots straddled selected segments of the skidroads. Seedlings were planted in four disturbance categories on the skidroads and in undisturbed soil above and below the skidroads. Soil characteristics were measured initially on the skidroads and in the undisturbed soil adjacent to the skidroads and tree growth was monitored for eight growing seasons after planting. Foliage was sampled for nutrient content at the end of the fifth year. The greatest adverse impacts on the soil were found in the inner track, i.e., the portion of the skidroads lying next to the cutbank. Here, the top 20 cm of mineral soil was on average 52% denser and 62% more resistant to penetration than the equivalent depth of undisturbed mineral soil. Soils in the outer track were also seriously degraded whereas the soils in the berm were not markedly different from the undisturbed situation in terms of density and penetrability. Disturbance exposed subsoil with inherently higher levels of free carbonates and a pH range of 6.3-7.0 compared with an average of 5.3 for the upper portion of undisturbed soil. Survival of Douglas-fir seedlings was significantly greater on the skidroad surface than on sidecast or undisturbed soil. However, growth of both Douglas-fir and lodgepole pine was reduced on skidroads, particularly in the inner track; reductions 5 years after planting amounted to 33% in height and 53% in volume for Douglas-fir and 32% and 48%, respectively, for lodgepole pine. After 8 years reductions were generally less, amounting to 25% in height and 38% in volume for Douglas-fir and 26% and 49%, respectively, for lodgepole pine. Growth of seedlings planted in the sidecast and berm was not significantly different than in undisturbed soil. The distinct character of the inner track was evident also by a relatively slow development of vegetation and by a composition of plant species dissimilar from that found on other parts of the skidroad or on undisturbed ground. Correlations are made among soil and seedling growth characteristics to explain some of the results and to guide further research. 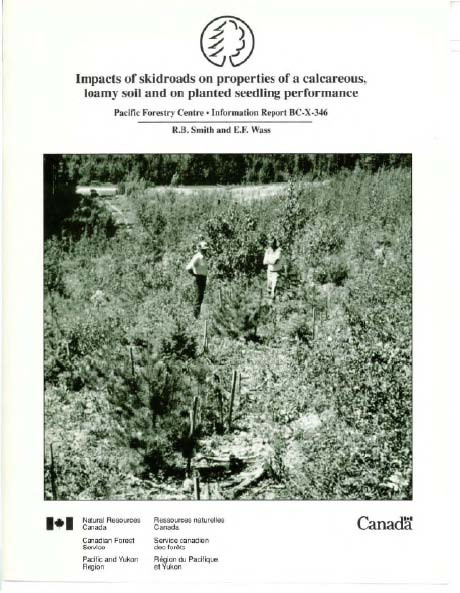