The whitespotted sawyer, Monochamus scutellatus scutellatus (Say) (Coleoptera: Cerambycidae), is one of the most damaging wood-boring insects in recently burned boreal forests of North America. In Canada, salvage logging after wildfire contributes to maintaining the timber volume required by the forest industry, but larvae of this insect cause signiÞcant damage that reduces the economic value of lumber products. This study aimed to estimate damage progression as a function of temperature in recently burned black spruce (Picea mariana (Miller) Britton, Sterns, and Poggenburg) and jack pine (Pinus banksiana Lambert) trees. Using axial tomographic technology, we modeled subcortical development and gallery depth progression rates as functions of temperature for both tree species. Generally, these rates were slightly faster in black spruce than in jack pine logs. Eggs laid on logs kept at 12°C did not hatch or larvae were unable to establish themselves under the bark because no larval development was observed. At 16°C, larvae stayed under the bark for >200 d before penetrating into the sapwood. At 20°C, half of the larvae entered the sapwood after 30-50 d, but gallery depth progression stopped for ≈70 d, suggesting that larvae went into diapause. The other half of the larvae entered the sapwood only after 100-200 d. At 24 and 28°C, larvae entered the sapwood after 26-27 and 21 d, respectively. At 28°C, gallery depth progressed at a rate of 1.44 mm/d. Temperature threshold for subcortical development was slightly lower in black spruce (12.9°C) than in jack pine (14.6°C) and it was 1°C warmer for gallery depth progression for both tree species. These results indicate that significant damage may occur within a few months after fire during warm summers, particularly in black spruce, which highlights the importance of beginning postfire salvage logging as soon as possible to reduce economic losses.

The whitespotted sawyer is a native insect that attacks trees in burned forests in Canada. It burrows galleries into the wood, thus reducing its market value.

The results from the analyses revealed that the hotter the summers, the quicker whitespotted sawyers will cause significant damage to wood. The damage can occur even just a few months after a fire. 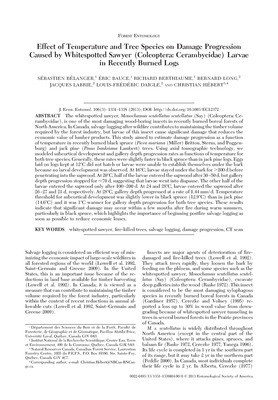