A synopsis of adventive species of Staphylinidae (Coleoptera) in Canada is provided. Of the over 1654 rove beetle species recorded from Canada, 156 species in 76 genera and 13 subfamilies are reported as adventive, constituting about 9.4% of the fauna. The majority of adventive species belong to two subfamilies, Staphylininae (51 species) and Aleocharinae (49), and the genera with the most species are Philonthus (16), Atheta (8), Aleochara (7) and Quedius (7). All 156 adventive species are reviewed, including diagnostic features (supported by 156 colour habitus photos and 230 black and white images of diagnostic characters), native range, detailed distribution in Canada (with 151 distribution maps), general distribution in the USA, early Canadian and North American records and habitat information. New jurisdictional records are Atheta longicornis (Gravenhorst) from Alberta, Philonthus sanguinolentus (Gravenhorst) from eastern Canada (Ontario) and Xantholinus longiventris Heer from Canada (British Columbia).

Insects are a part of many different ecosystems including forest ecosystems. They contribute to maintaining healthy forests by their role in carbon and nutrient dynamics. Many diverse groups of beetles, including rove beetles, may also be used as indicators of forest health and to detect environmental changes in forest ecosystems.

The main aim of this work was to contribute to the knowledge of Canadian insect fauna by providing diagnostic tools, information on their biology and distribution and methods of introduction into Canada. It will support studies on the impact of these species on the environment and native species.

Written by 15 authors from Canada, the USA, Germany, Denmark, and France, this book provides a synopsis of adventive (exotic) species of rove beetles (Coleopteran insects) in Canada. Of the over 1654 rove beetle species recorded in Canada, about 10% (156 species) of the fauna are reported as adventive.

All species are reviewed, including diagnostic features (supported by colour photos of the various species and black and white images of diagnostic characters), native range, detailed distribution in Canada, general distribution in the USA, early Canadian and North American records and habitat information. 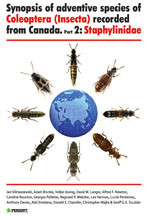