Background: The genomic architecture of adaptive traits remains poorly understood in non-model plants. Various approaches can be used to bridge this gap, including the mapping of quantitative trait loci (QTL) in pedigrees, and genetic association studies in non-structured populations. Here we present results on the genomic architecture of adaptive traits in black spruce, which is a widely distributed conifer of the North American boreal forest. As an alternative to the usual candidate gene approach, a candidate SNP approach was developed for association testing.

Conclusions: The sharing of genomic regions and significant SNPs between budset timing and tree height indicates pleiotropic effects. Significant QTLs and SNPs differed quite greatly among years, suggesting that different sets of genes for the same characters are involved at different stages in the tree’s life history. The functional diversity of genes carrying significant SNPs and low observed PVE further indicated that a large number of polymorphisms are involved in adaptive genetic variation. Accordingly, for undomesticated species such as black spruce with natural populations of large effective size and low linkage disequilibrium, efficient marker systems that are predictive of adaptation should require the survey of large numbers of SNPs. Candidate SNP approaches like the one developed in the present study could contribute to reducing these numbers.

Black spruce, a very common conifer in North American boreal forests, has adapted to a wide variety of environmental conditions. Researchers wishing to isolate the genes responsible for this adaptive capability studied black spruce trees of various origins that were subject to different climatic regimes and had extremely high values for two characteristics considered to be related to their adaptive capability: bud break (i.e., bud deployment) and height. They then used genetic markers found in a few hundred genes and various statistical methods to associate the values for these two characteristics with the markers.

They found some 20 regions of the black spruce genome and some 30 markers belonging to an equal number of genes that were associated with one of the characteristics or both.

By successfully identifying the regions of the genome and gene markers related to differences in bud break and height growth, the researchers demonstrated the potential for using this type of information to more effectively manage black spruce genetic resources, especially in climate change conditions. These findings are valid for eastern Canada. 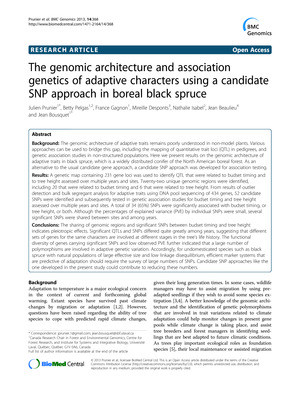