The success of forest pest control programs largely depends on pest vulnerability at the time of intervention. In order to improve the efficacy of pest control activities in the forest, researchers at the Canadian Forest Service developed BioSIM in the 1990s. This software links weather data with information on how the development of a given pest species is affected by temperature, in order to predict the timing of the various stages of its life cycle. Since its development, BioSIM has continued to evolve in response to increasingly diversified user needs. Version 10 is now available!

This publication reports on the new version of the BioSIM software program.

BioSIM is a software program used to forecast events in the seasonal biology of insect pests and their host plants. These forecasts are based on compiled weather data, among other things.

Version 10 of BioSIM includes new models for predicting the effects of weather conditions on physical and biological processes. Used in a climate change scenario, BioSIM also allows to forecast events in a changing environment. 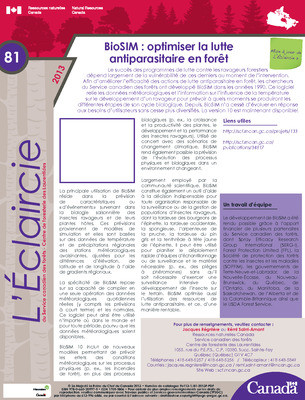