The temperature and emissivity of forest fire flames play a key role in understanding fire behavior, in the modeling of fire spread, and in the calculation of fire parameters by means of active fire thermal remote sensing. Essential to many of these is the often-made assumption that vegetation fire flames behave as greybodies in the infrared (IR). Though the emissivity of flames and its relationship to flame depth has been measured experimentally using thermal imagers working in the LWIR (8 - 12 Âµm), no published study has yet demonstrated relationships in the important MWIR (3 â 5 Âµm) spectral region, nor have conclusively demonstrated that the assumption of greybody behavior across these two important IR atmospheric windows fits well with reality. Our study explores these issues using measurements of boreal forest fuels burned with flame depths ranging from 0.2 to 4.2 m. Observations of two stable blackbody sources made through the differing flame depths were used to explore flame spectral emissivities and their relationship to flame depth. We found essentially the same relationship between flame emissivity and flame depth for both spectral regions, (extinction coefficient K = 0.7 m-1), confirming that the greybody assumption for forest fire flames in the MWIR and LWIR atmospheric windows appears valid for the fire conditions encountered here.

This publication aims to verify a long believed assumption regarding how efficiently flames convert heat energy into infrared radiation (the so called “emissivity”). In short the physics of flames are studied, with the intention of better understanding how soot emits radiation. The study presents findings from a series of small experimental fires conducted by CFS researchers and analysis of infrared imagery collected during these fires. A detailed review of the role of this assumption in similar research and applications over the years is also presented. This study confirmed the long believed assumption of fire scientists regarding flame emissivity. The results remove uncertainty related to research both old and new in which this assumption has been made. Although this is not a shocking finding to many researchers it serves the purpose of changing what was once an ‘assumption’ into what is now a ‘fact’. 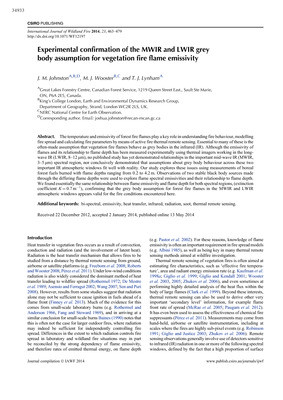