Stand-level diversity after natural disturbance can potentially differ across a large, contiguous forest region despite being dominated by the same canopy species throughout as differences in disturbance types and local site conditions can regulate species distribution. Our main objective was to examine the relative importance of natural disturbances (spruce budworm (Choristoneura fumiferana) outbreak, windthrow, and their interaction) and local site factors (climate, physiography, and stand structure and composition variables) on woody vegetation diversity among three, physiographically distinct locations across a large, contiguous forest region. Seventy-six Abies balsamea-Betula spp. stands affected by natural disturbance were compared and analysed using canonical ordination methods, diversity indices, and ANOVA. Different combinations of factors were important for vegetation re-establishment at each location. Differences in alpha (α), beta (β), gamma (γ), Shannon’s H’, and evenness (J) diversity indices were observed among locations across the study region. Our findings indicate that while certain processes are important for maintaining canopy dominance by Abies balsamea and Betula spp. throughout the region, different combinations of factors were important for creating variation in woody species diversity among locations that resulted in greater woody species diversity at the regional scale.

In three regions of Quebec (Abitibi, Gaspésie and the North Shore), researchers studied the effects of spruce budworm outbreaks and windfall (trees blown down by the wind) on the regeneration of balsam fir and birch trees. These regions are different in terms of climate conditions and the frequency at which these natural disturbances occur.

They noticed strong variations in the effect of these disturbances at the local level on regeneration, but no trend revealed itself in any of the three regions studied. However, in each of the regions, the disturbances (windfall and spruce budworm outbreaks) were not severe enough to change the composition of the forest stands. 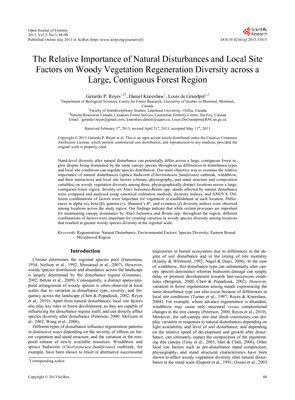