Height and diameter of white spruce clones were measured over two growing seasons in a forest nursery and for 4 more yr at two field sites. Clonal heritability (Hc2) was moderate and stable in the nursery, but decreased with age, reaching 0.26 and 0.11 for height and 0.14 and 0.04 for diameter, respectively, at the two field sites. Height exhibited weak to moderate Hc2 and strong genotypic correlations with the different growth characteristics. The strong age-age genotypic correlations (≥0.809) and nursery-plantation correlations (≥0.347) for height indicate that selection for height can be conducted at a young age thus reducing the costs of clonal tests.

Nearly 4% of white spruce plants used for reforestation in Quebec are produced by somatic embryogenesis, a plant cloning method. These plants are produced in the laboratory from seeds harvested from trees exhibiting desired characteristics.

In this study, researchers monitored the growth (height and diameter) of the seedlings resulting from somatic embryogenesis for 6 years: 2 years in containers in the nursery and 4 years thereafter once they were planted in the field. They checked whether the inherited growth characteristics were influenced by the environment and whether this influence was stable over time.

The researchers found that there was little environmental influence in the nursery; however, environmental influence increased over time for the seedlings in the field. Transplantation shock may be one of the factors responsible for the changes observed between the nursery and the field. However, the age/height genetic correlations are numerous for height, indicating that the ranks of clones remain the same over time. This means that a descendant (or ramet) of a given clone that was in the highest ranks in the beginning remained there over the years.

Conclusion: To reduce the number of clones to be tested for higher growth height, it would be possible to eliminate some of them at a young age because of the many correlations observed for this characteristic over time. 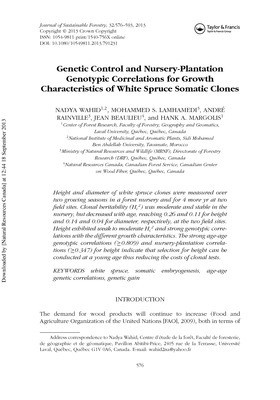