The temporal and spatial distributions of mortality caused by Armillaria ostoyae (Romagn.) Herink were determined on 2 ha of a 25-year-old Douglas-fir plantation in the southern interior of British Columbia. Mortality began at age 6 (two trees/ha/yr), increased rapidly until age 10 (35 trees/ha/yr) and then levelled off (17 trees/ha/yr). Early mortality occurred near old-growth stumps. At age 25, about 80 disease centers per ha are evident, some of which had coalesced to form unstocked openings; 21.8% of planted Douglas-fir trees have been killed and another 5.8% are infected. Dead and diseased trees occupy 22.5% of the plot area. The timber production expectations for plantations such as this, as well as management recommendations and possible remedial treatments, are discussed. 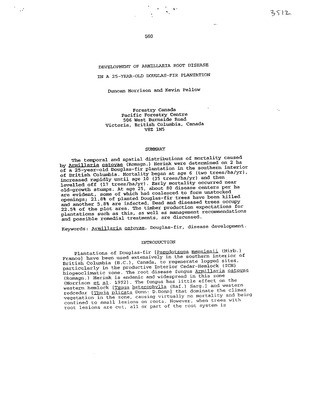