Preliminary investigation has revealed several potential resistance mechanisms operating in western larch which may provide tolerance to Armillaria ostoyae. Infections on the root systems of mature, vigorous trees are often stopped before reaching the vascular cambium by the formation of necrophylactic periderms or what appears to be the rapid production of multiple layers of phellem. If periderm formation fails to prevent cambial infection resinosus and callusing may check the fungus which is then confined by compartmentalization to woody tissues present at the time of infection. Adventitious roots form on the callused ends of infected roots and appear to be protected from further infection by the compartmentalization process. Ongoing investigation will reveal if there is a relationship between root size and age with respect to the tolerance of western larch to attack by A. ostoyae. 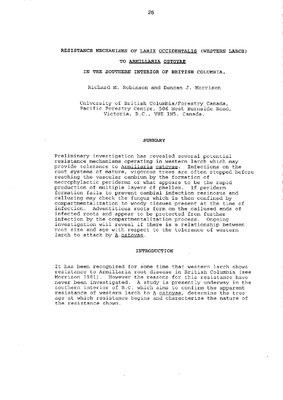