Gene families differ in composition, expression, and chromosomal organization between conifers and angiosperms, but little is known regarding nucleotide polymorphism. Using various sequencing strategies, an atlas of 212k high-confidence single nucleotide polymorphisms (SNPs) with a validation rate of more than 92% was developed for the conifer white spruce (Picea glauca). Nonsynonymous and synonymous SNPs were annotated over the corresponding 13,498 white spruce genes representative of 2,457 known gene families. Patterns of nucleotide polymorphisms were analyzed by estimating the ratio of non synonymous to synonymous numbers of substitutions per site (A/S). A general excess of synonymous SNPs was expected and observed. However, the analysis from several perspectives enabled to identify groups of genes harboring an excess of nonsynonymous SNPs, thus potentially under positive selection. Four known gene families harbored such an excess: dehydrins, ankyrin-repeats, AP2/DREB, and leucine-rich repeat. Conifer-specific sequences were also generally associated with the highest A/S ratios. A/S values were also distributed asymmetrically across genes specifically expressed in megagametophytes, roots, or in both, harboring on average an excess of nonsynonymous SNPs. These patterns confirm that the breadth of gene expression is a contributing factor to the evolution of nucleotide polymorphism. The A/S ratios of Medicago truncatula genes were also analyzed: several gene families shared between P. glauca and M. truncatula data sets had similar excess of synonymous or nonsynonymous SNPs. However, a number of families with high A/S ratios were found specific to P. glauca, suggesting cases of divergent evolution at the functional level.

Evolution has been responsible for the successive emergence of new species. In the chronology of evolution, spruce trees emerged ahead of alfalfa (between 80 million and 100 million years earlier). Nowadays the genomes of these two species are well known.

From that starting point, researchers studied variations in the sequences of 13,500 white spruce genes and compared them with alfalfa genes. Their goal was to identify differences that might explain why these two species diverged in terms of the functions of some of their genes and the resulting production of proteins. They reported that a few large gene families presented similar differences between the two species.

This new knowledge of white spruce—a species of choice because of the quality of its wood and plantation yields—will contribute to a better selection of individuals for the production of plants for reforestation. 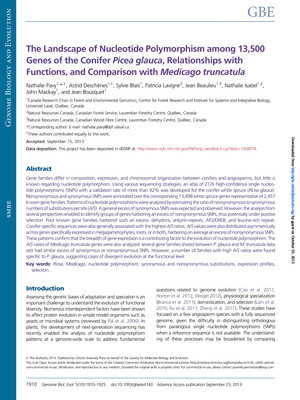