The boreal zone and its ecosystems provide numerous provisioning, regulating, cultural, and supporting services. Because of its resources and its hydroelectric potential, Canada’s boreal zone is important to the country’s resource-based economy. The region presently occupied by Canada’s boreal zone has experienced dramatic changes during the past 3 million years as the climate cooled and repeated glaciations affected both the biota and the landscape. For about the past 7000 years, climate, fire, insects, diseases, and their interactions have been the most important natural drivers of boreal ecosystem dynamics, including rejuvenation, biogeochemical cycling, maintenance of productivity, and landscape variability. Layered upon natural drivers are changes increasingly caused by people and development and those related to human-caused climate change. Effects of these agents vary spatially and temporally, and, as global population increases, the demands and impacts on ecosystems will likely increase. Understanding how humans directly affect terrestrial and aquatic ecosystems in Canada’s boreal zone and how these effects and actions interact with natural disturbance agents is a prerequisite for informed and adaptive decisions about management of natural resources, while maintaining the economy and environment upon which humans depend. This paper reports on the genesis and present condition of the boreal zone and its ecosystems and sets the context for a detailed scientific investigation in subsequent papers published in this journal on several key aspects: carbon in boreal forests; climate change consequences, adaptation, and mitigation; nutrient and elemental cycling; protected areas; status, impacts, and risks of non-native species; factors affecting sustainable timber harvest levels; terrestrial and aquatic biodiversity; and water and wetland resources.

This review paper sets the context for a series of articles in Environmental Reviews on boreal Canada: carbon; climate change consequences, mitigation and adaptation; biodiversity; nutrient and elemental cycling; water resources; non-native species; factors affecting sustainable timber harvest levels; and protected areas. Boreal Canada has experienced dramatic changes during the past 3 million years as climate cooled and repeated ice ages affected plants, animals and the landscape. After relatively rapid and dramatic changes at the end of the last ice age, boreal ecosystems stabilized about 7000 years ago, and since then, climate, fire, insects, diseases have been the most important natural disturbance agents affecting these ecosystems, including their renewal, growth, and landscape distribution. Thus, boreal ecosystems have evolved and adapted to deal with these constantly changing conditions. More recently, human-induced disturbances and climate change are increasingly affecting these ecosystems. All disturbances, whether natural or human-induced, change in space and time, and, as global population increases, demands and impacts on boreal ecosystems will likely increase. If we understand more about how people directly affect boreal Canada and the links between these effects and natural disturbances, then that information can help policy makers and resource managers make better informed decisions about boreal Canada. 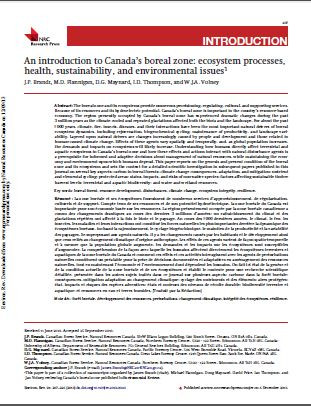