Indicator species have been used successfully for estimating ecosystem integrity, but comparative studies for defining optimal taxonomic group remain scarce. Furthermore, species combinations may constitute more integrative tools than single species indicators, but case studies are needed to test their efficiency. We used Indicator Species Analysis, which statistically determines the association of species to one or several groups of sites, to obtain indicators of ecosystem recovery after various deer density reductions. We used five taxonomic groups: plants, carabid beetles, bees, moths and songbirds. To test whether species combinations could complement single indicator species, we used plants as a model taxon and examined the indicator value of joint occurrence of two or three plant species. Our study relies on experimental controlled browsing enclosures established for six years on Anticosti Island (Quebec). Four levels of deer density (0, 7.5 and 15 deer km-2 and natural densities between 27 and 56 deer km-2) were studied in two vegetation cover types (uncut forests and cut-over areas), in a full factorial design for a total of eight experimental treatments. For all taxa but bees, we tested 54 treatment groups consisting in one specific density or in a sequence of two or more consecutive deer densities in one or both cover types (ten groups for bees, sampled only in cut-over areas). We found 12 plants, 11 moths and one songbird to be single species indicators of ecosystem conditions obtained under 12 different treatment groups. Six treatment groups were indicated by plants and six different ones by moths, of which one group was also identified by a songbird species. Moths were thus worth the extra sampling effort, especially since the groups they indicated were more treatment-specific (mainly one or two deer density treatments). We tested the same 54 treatment groups for plant species combinations represented by two or three co-occurring species. Plant combinations efficiently complemented plant singletons for detecting ecosystem conditions obtained under various deer densities. In fact, although singletons were highly predictive, 17 additional treatment groups were identified exclusively with two- and three-species combinations, some being more treatment-specific. Our findings show that plants and moths provide complementary indicators of ecosystem conditions under various deer densities, and that computing species combinations increases our capacity to monitor ecosystem recovery after reducing herbivore densities.

In order to assess the integrity of forest ecosystems, scientists try to identify indicative species. The main question is to determine which species or group of species will provide the best picture of the integrity of these forests.

On Anticosti Island in Quebec, the forest is undergoing changes in structure and composition because of the high density of white-tailed deer. To evaluate the capacity of these deer-ravaged forests to recover, researchers studied the indicative potential of five groups of species: plants, bees, moths, songbirds and beetles. Tests were conducted at sites where deer density and the type of plant cover (cut or uncut forests) varied.

The results showed that only the plants and moths provided indications regarding the conditions of the ecosystem for sites where deer density varied. By combining these indicators, it is possible to evaluate the ecosystem's recovery level after the deer population has been reduced. 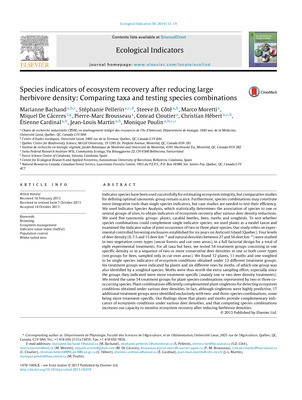