This paper reports plant and soil distribution of 15N 1 and 8 years after fertilizer application near Spillimacheen in the British Columbia interior. The experiment was originally established to test the efficacy of fertilization on snow; 15N-urea, 15NH4NO3 and NH415NO3 were applied at 100 kg N ha-1 to 11-year-old lodgepole pine (Pinus contorta Dougl. var. latifolia Engelm.) in January 1981. After one growing season (October 1981), eight of the 16 plots were destructively sampled. Total recovery of 15N in plot trees was low, from 1.9 to 10.1%. Recovery in understorey was comparable (2.4-3.4%), and 30.6-73.2% of 15N was retained in the soil in organic form. The remaining eight plots were sampled in August 1988. There was a significant growth response to fertilization, amounting to a 34% increase in stem volume for fertilized (ammonium nitrate or urea) versus control trees after eight growing seasons. Approximately two-thirds of the 15N recovered in 1981 could still be accounted for in plant biomass and soil. There had been little additional 15N uptake by plot trees, but more continuing uptake by understorey. About one-fifth of 15N recovered in 1988 was found outside the plot boundaries. The results are consistent with the hypotheses that (i) tree response to fertilization is largely the result of the increase in photosynthetic capacity generated by the first year of uptake, (ii) fertilizer N, once immobilized in the soil, has low availability to crop trees, and (iii) the N mineralized is subject to losses, presumably by leaching and denitrification. Strategies are needed for maximizing the uptake of N in the first growing season. Further research is recommended to determine what factors limit the uptake of available N by trees, and to quantify natural levels of leakage of mineral N from the ecosystem due to denitrification and leaching. 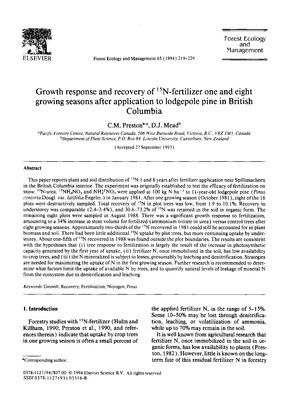