The 20th century was a pivotal period at high northern latitudes as it marked the onset of rapid climatic warming brought on by major anthropogenic changes in global atmospheric composition. In parallel, Arctic sea ice extent has been decreasing over the period of available satellite data records. Here, we document how these changes influenced vegetation productivity in adjacent eastern boreal North America. To do this, we used normalized difference vegetation index (NDVI) data, model simulations of net primary productivity (NPP) and tree-ring width measurements covering the last 300 years. Climatic and proxy-climatic data sets were used to explore the relationships between vegetation productivity and Arctic sea ice concentration and extent, and temperatures. Results indicate that an unusually large number of black spruce (Picea mariana) trees entered into a period of growth decline during the late-20th century (62% of sampled trees; n = 724 cross sections of age >70 years). This finding is coherent with evidence encoded in NDVI and simulated NPP data. Analyses of climatic and vegetation productivity relationships indicate that the influence of recent climatic changes in the studied forests has been via the enhanced moisture stress (i.e. greater water demands) and autotrophic respiration amplified by the declining sea ice concentration in Hudson Bay and Hudson Strait. The recent decline strongly contrasts with other growth reduction events that occurred during the 19th century, which were associated with cooling and high sea ice severity. The recent decline of vegetation productivity is the first one to occur under circumstances related to excess heat in a 300-year period, and further culminates with an intensifying wildfire regime in the region. Our results concur with observations from other forest ecosystems about intensifying temperature-driven drought stress and tree mortality with ongoing climatic changes.

The impacts of climate change in the Arctic, such as melting sea ice, not only affect marine organisms in the region, they also affect nearby terrestrial ecosystems.

This study establishes a direct relationship between melting Arctic ice and the reduced productivity of black spruce in Quebec's boreal forest between the 51st and 53rd parallels, which is right at the current boundary of the province's managed forest.

One notion often conveyed is that climate change may promote tree growth. However, this study demonstrates the contrary: the increase in summer temperatures and the melting of Arctic ice in connection with current climate change leads to increased drought periods in the boreal forest. This shortage of water causes decreased tree growth, and therefore a loss in forest productivity.

The relationship between forest productivity and the Arctic ice melt will have additional negative impacts if the anticipated escalation of the ice melt over the course of this century – which will increase regional climate warming – becomes a reality. This will be compounded by the impact of forest fires, which are expected to increase in number in the years to come. The study concludes that in the near future, climate change is likely to bring about major changes in the structure and composition of the forest stands in this region. 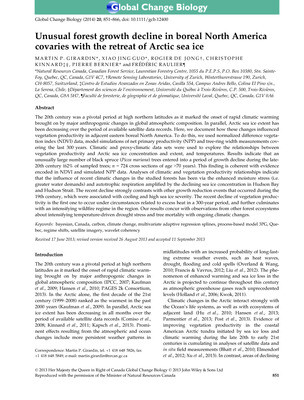