Calcium-dependent protein kinases (CDPKs) are multi-functional proteins that combine calcium-binding and signaling capabilities within a single gene product. This unique versatility enables multiple plant biological processes to be controlled, including developmental programs and stress responses. The genome of flowering plants typically encodes around 30 CDPK homologs that cluster in four conserved clades. In this review, we take advantage of the recent availability of genome sequences from green algae and early land plants to examine how well the previously described CDPK family from angio-sperms compares to the broader evolutionary states associated with early diverging green plant lineages. Our analysis suggests that the current architecture of the CDPK family was shaped during the colonization of the land by plants, whereas CDPKs from ancestor green algae have continued to evolve independently.

At the heart of all cells in living organisms, there are substances that govern various functions. One of these substances, calcium, acts as a signalling molecule and has a specific signature. Calcium sends an action message to receptors: calcium-dependent protein kinase – CDPK.

Thanks to the recent availability of genomes for certain aquatic plants (green algae) and land plants (including mosses and trees), researchers have found significant differences in the diversity of CDPKs. They were able to identify the CDPKs that contributed to the transitioning of aquatic species to land environments. These proteins also played a key role in the evolution of plants in terms of the various stresses connected to the land environment, such as drought and the presence of new insect pests and diseases.

These results will lead to a better understanding of the adaptation capacities of forest species in terms of climate change (particularly with regard to water stress). In fact, it will be possible to identify which protein kinases contribute to water stress adaptation in trees in order to promote good growth. 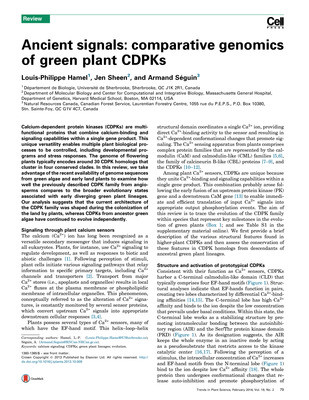