Stumps as a habitat for Collembola during succession from clear-cuts to old-growth Douglas-fir forests. 1994. Setala, H.; Marshall, V.G. Pedobiologia 38: 307-326.

We studied the natural succession of the collembolan fauna during the decomposition of stumps in successional Douglas-fir ecosystems at three sites on southern Vancouver Island, British Columbia, Canada. Each site was represented by four seres, comprising regeneration (3-8 years old), immature (25-45 years old), mature (65-85 years old), and old growth stands (>200 years old). A total of 216 samples collected during autumn, winter and spring yielded 15 601 individuals, comprising 72 species, 40 genera and 12 families. Most of the species encountered (63.8%) were common to all sites. Densities on a volume basis equaled those in soil. Well-decayed stumps contained about 850 000 individuals m-3. This species-rich and numerically abundant collembolan fauna was essentially a subset of the soil fauna. The composition of the collembolan community was more sensitive to the successional status of the forest than to season of sampling or to decay status of the wood. Stumps provided a suitable habitat for most soil Collembola and emphasizes the importance of this woody debris in forest ecosystems. Favourable moisture conditions make this habitat an important refugium for these arthropods during early stages of forest succession. By virtue of the large population in stumps, Collembola likely contribute greatly to the decomposition of this woody material. 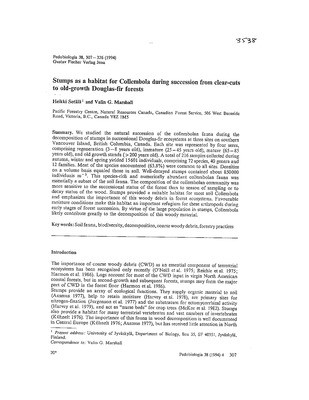