The spruce budworm (SBW) is a native insect pest whose outbreaks constitute the most significant natural disturbance affecting balsam fir stands in Canada. Budworm parasitoids play a vital role in maintaining SBW populations at endemic levels between outbreaks. One of these parasitoids, the wasp Tranosema rostrale, uses its stinger to lay an egg under the skin of SBW larvae. The wasp larva produced from this egg will feed on the internal tissues of its host.

To measure the levels of parasitism by T. rostrale in endemic SBW populations, researchers use a technique called "sentinel larvae", which consists of rearing SBW larvae on artificial food in a laboratory setting before exposing them to parasitoids in the forest.

The question addressed by this study is whether the use of this artificial food, as compared with balsam fir foliage, affects the probability of the SBW being attacked by T. rostrale. In the field, diet did not have an effect on parasitism levels. In the laboratory however, a much higher number of foliage-reared larvae were attacked by the wasp.

Despite this preference for foliage-reared larvae in the laboratory, the researchers concluded that larvae reared on the artificial diet could be used to determine levels of parasitism in the field, without the risk of biasing the results. 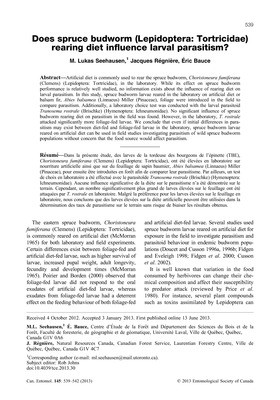