Single-nucleotide polymorphisms (SNPs) are rapidly becoming the standard markers in population genomics studies; however, their use in nonmodel organisms is limited due to the lack of cost-effective approaches to uncover genome- wide variation, and the large number of individuals needed in the screening process to reduce ascertainment bias. To discover SNPs for population genomics studies in the fungal symbionts of the mountain pine beetle (MPB), we developed a road map to discover SNPs and to produce a genotyping platform. We undertook a whole-genome sequencing approach of Leptographium longiclavatum in combination with available genomics resources of another MPB symbiont, Grosmannia clavigera. We sequenced 71 individuals pooled into four groups using the Illumina sequencing technology. We generated between 27 and 30 million reads of 75 bp that resulted in a total of 1, 181 contigs longer than 2 kb and an assembled genome size of 28.9 Mb (N50 = 48 kb, average depth = 125x). A total of 9052 proteins were annotated, and between 9531 and 17 266 SNPs were identified in the four pools. A subset of 206 genes (containing 574 SNPs, 11% false positives) was used to develop a genotyping platform for this species. Using this roadmap, we developed a genotyping assay with a total of 147 SNPs located in 121 genes using the Illumina Sequenom iPLEX Gold. Our preliminary genotyping (success rate = 85%) of 304 individuals from 36 populations supports the utility of this approach for population genomics studies in other MPB fungal symbionts and other fungal nonmodel species.

The mountain pine beetle is the most destructive insect in British Columbia’s pine forests. It feeds on several species of pine, including ponderosa pine and shore pine. The current infestation began in the mid-1990s. Since then, approximately 17 million hectares of shore pine, i.e. 50% of the total volume of this commercial species, have been devastated, resulting in severe economic losses.

These losses are caused by the pine beetle and the pathogens associated to it, including Leptographium longiclavatum. This mushroom also infects jack pines and certain jack pine hybrids. The purpose of this study was to develop and demonstrate the usefulness of a new genomics approach that would make it possible to characterize the population structure of this pathogen as well as its demographic history.

To achieve this, instead of working solely with small sections of the genome, researchers sequenced the entire genome of several individuals of Leptographium longiclavatum. By comparing the various genomes, researchers were able to identify 147 areas in the genome that make it possible to distinguish the different pathogen populations.

This study resulted in the creation of a centre of expertise, the purpose of which is to quickly identify the hereditary population of an individual of L. longiclavatum. Using this information, scientists can monitor populations, assess the aggressiveness of the pathogen and potentially gauge the severity of the epidemic in which it is involved. 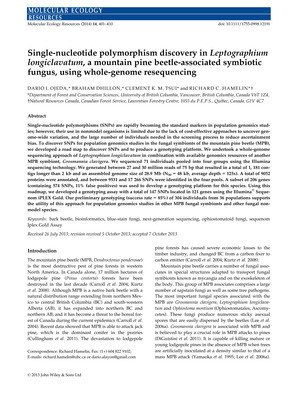