Traditional approaches to ecological land classification (ELC) can be enhanced by integrating, a priori, data describing disturbances (natural and human), in addition to the usual vegetation, climate, and physical environment data. To develop this new ELC model, we studied an area of about 175,000 km2 in the Abies balsamea–Betula papyrifera and Picea mariana-feathermoss bioclimatic domains of the boreal forest of Québec, in eastern Canada. Forest inventory plots and maps produced by the Ministère des Ressources naturelles du Québec from 1970 to 2000 were used to characterize 606 ecological districts (average area 200 km2) according to three vegetation themes (tree species, forest types, and potential vegetation-successional stages) and four sets of explanatory variables (climate, physical environment, natural and human disturbances). Redundancy, cluster (K-means) and variation partitioning analyses were used to delineate, describe, and compare homogeneous vegetation landscapes. The resulting ELC is hierarchical with three levels of observation. Among the 14 homogeneous landscapes composing the most detailed level, some are dominated by relatively young forests originating from fires dating back to the period centered on 1921. In others, forest stands are older (fires from the period centered on 1851), some are under the influence of insect outbreaks and fires (southern part), while the rest are strongly affected by human activities and Populus tremuloides expansion. For all the study area and for parts of it, partitioning reveals that natural disturbance is the dominant data set explaining spatial variation in vegetation. However, the combination of natural disturbances, climate, physical environment and human disturbances always explains a high proportion of variation. Our approach, called "ecological land classification of homogeneous vegetation landscapes", is more comprehensive than previous ELCs in that it combines the concepts and goals of both landscape ecology and ecosystem-based management.

The traditional approach used in ecological land classification consists in delineating distinct ecological areas, such as prairies and taiga plains, according to factors such as climate, topography and vegetation. However, this approach does not take into account natural or human disturbances, such as forest fires and logging.

In this study, the researchers included these disturbances in the process used to classify lands belonging to two of Quebec’s bioclimatic domains (the balsam fir–white birch domain and the spruce–moss domain). They used data from the ministère des Ressources naturelles du Québec’s inventory from 1970 to 2000 to identify more than 600 ecological districts based on tree species, forest types and forest successional stages. They also associated climate factors, physical environment factors (topography, slope, etc.), and disturbances. The study findings helped to explain in more specific detail than the traditional approach does the variability in vegetation of these bioclimatic sub domains. 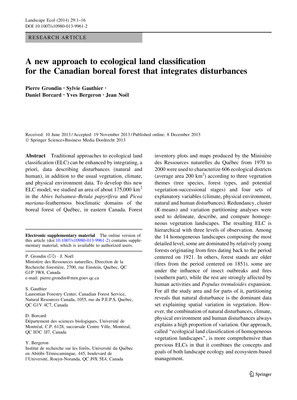