A model of the post-fire recruitment of Picea mariana and Pinus banksiana as a function of salvage timing and intensity. 2014. Splawinski, T.B.; Greene, D.F.; Gauthier, S. Ecol. Model. 282:35-43.

In this paper, we model the post-fire recruitment dynamics of two aerial seedbank species, Picea mariana and Pinus banksiana, in response to salvage logging. The model incorporates: (1) initial seed availability as a function of source tree basal area and proportion of stand salvaged; (2) seed abscission as a function of time; (3) seedling survivorship as a function of seed mass, seedbed proportion, and granivory; and (4) seedling and seed mortality as a function of salvage operations. We also elaborate a simulation of the effect of direct seeding via cone-bearing branches fed into a moving chipper. The model performed adequately when tested against data sets from two fires in Quebec and one in Saskatchewan. In particular, it showed that P. mariana was more adversely affected by early salvage than P. banksiana because of its far slower seed abscission rate. The model predicted that a delay in salvage or a decrease in salvage proportion would enhance tree regeneration densities, especially for P. mariana. Finally, model projections indicatethat the use of a chipper to disseminate seeds during the harvesting would permit either species to be adequately regenerated cheaply even with low pre-fire basal area per area or very early salvage.

The objective of this study was to develop a model for predicting the regeneration of jack pine and black spruce in burned areas that have undergone salvage logging or not.

The researchers determined the quantity of seed available before salvage logging by taking into account the quantity of trees present prior to the fire and the number of salvaged trees. They also studied the dispersion of seed over time, seed survival rate, seed predation by animals (squirrels, mice and other seed eaters), germination sites, and mortality rates (seeds and seedlings) resulting from tree salvaging operations, when applicable.

The results show that the regeneration of black spruce was more affected by rapid post fire salvage logging than that of jack pine, mainly because it takes more time for black spruce seed dispersal to occur after a fire than it does for jack pine. The researchers also noticed that if harvesting was delayed or if fewer trees were salvaged, it resulted in increased regeneration for both species. 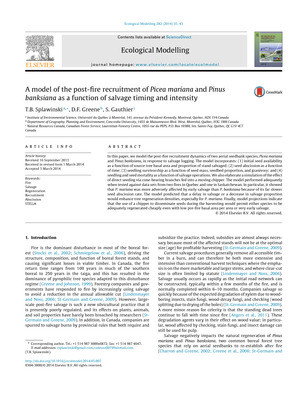