Forest productivity is driven by a suite of direct climatic and non-climatic factors that are transient or permanent. The kind of productivity driver and the nature of their effects vary by species, and scale dependencies potentially complicate these relationships. This study explored productivity-driver relations in eastern Boreal Canada and determined spatial effects in productivity control when expressed with stand dominant height at a reference age (site index). Data from 4,217 temporary sample plots obtained from boreal mixedwood and conifer bioclimatic domains, and with varied species composition, were used in this study. A single-level global model that assumes equal sensitivities across spatial scales was calibrated and compared with three alternative models reflecting different hypotheses on possible spatial heterogeneities. Alternative models were calibrated by plot-level soil deposit types (microscale), landscape dominant deposits (mesoscale) and bioclimatic domains (macroscale). A marked difference between the global and alternative models was observed, suggesting that a single global model does not sufficiently reflect existing heterogeneity in productivity-driver relationships. A combination of macro- and microscale models provided the best explanation of site index. Results further showed that site index is mainly driven by species composition (complementarity effects of aspen and jack pine compositions) and stand diameter structural diversity effects. It is concluded that successional changes, more than direct climatic effects, drive productivity.

Using the data collected in mixed boreal forests and coniferous forests of Eastern Canada, the researchers developed two types of models. The first is a global model based on the principle that a factor’s impact on productivity is consistent across an entire area. The second model is used to differentiate this impact according to three spatial scales: plot, landscape and bioclimatic domain.

The best estimate of productivity was obtained by combining the plot model with that of the bioclimatic domain. Consequently, the global model was found to be less satisfactory for measuring forest productivity. 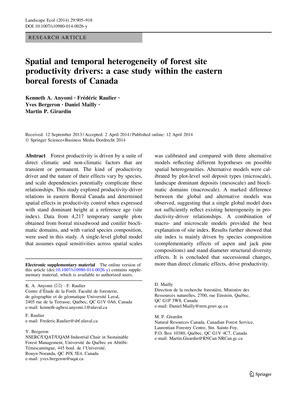