Boreal forest soils are a significant component of the global C cycle. Although wildfire and subsequent salvage logging are major disturbances in this ecosystem, their combined influence on soil organic carbon (SOC) and total soil nitrogen (N) storage is poorly understood. Our objective was to investigate the recent influence of fire and post-fire salvage logging on SOC and total soil N stocks and distribution in the profile of boreal forest soils. We measured SOC and total N concentrations, bulk density and pH of organic, surface mineral (0–15 cm depth) and subsurface mineral (15–40 cm depth) soil horizons on 14 different fires (burned 2005–2007) in Quebec, Canada. Each site comprised three treatments: a control stand (CTR), a recently burned (<7 years) stand that was not salvaged logged (B-NL) and a recently burned (<7 years) stand that was salvage logged (B-L) within 2 years after the fire. Our results showed that fire-affected stands had less SOC and total N stored in organic horizons, and that post-fire salvage logging reduced SOC concentration in the organic horizon, but promoted SOC and total N enrichment in the subsurface mineral soil. We conclude that mechanical disturbance of recently burned stands can contribute to the mixing of the forest floor and organic matter with the mineral soil, and influence the depth distribution of SOC and total N in the soil profile. When the entire soil profile was considered, SOC and total N stocks were equivalent in burned versus burned and salvage-logged sites. Further research should focus on how disturbance type and intensity influence the molecular nature of soil organic matter and the mechanisms by which SOC and total soil N are retained in the different soil horizons.

The researchers studied 14 sites in Quebec where fires had occurred recently (less than 7 years ago). At each of these sites, there was an unburned area, an unharvested burned area and a burned area where harvesting had occurred in the two years following the fire.

It was found that the soil in the burned sites contained less nitrogen and carbon in the organic (top) layer. In addition, post fire harvesting further reduced the carbon concentration in the organic layer, but increased the nitrogen content in the mineral subsoil.

The researchers concluded that mechanical disturbances in burned stands stir up the soil, which influences the carbon and nitrogen distribution in the soil layers. However, in the overall soil profile (organic and mineral layers), harvesting in burned forests does not seem to have an impact on the quantity of carbon and nitrogen. 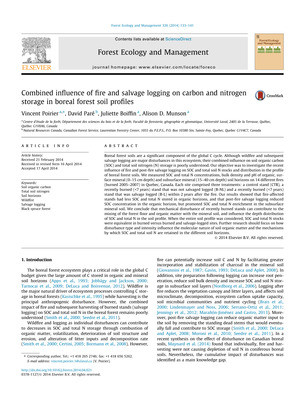